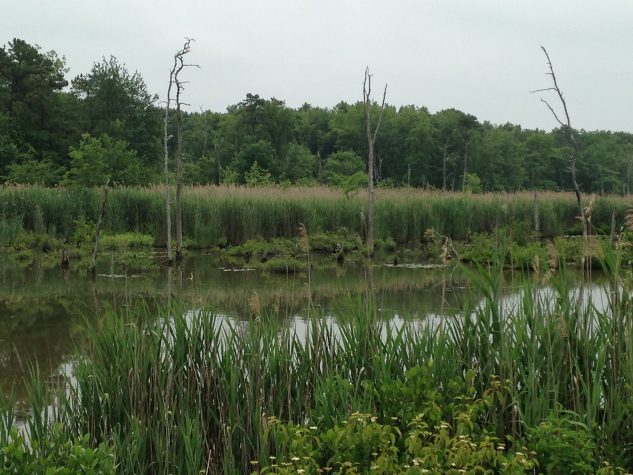 Deep Run Preserve is an 850-acre open space area consisting of valuable floodplains and upland Pinelands with areas of functionally impaired wetlands. The Deep Run Preserve Wetland Enhancement Project (project) will enhance wetlands in two separate areas within the preserve, enhancement areas A and B. Area A consists of tidal emergent wetlands and tidal freshwater scrub-shrub wetlands along the banks of Deep Run, while Area B consists of nontidal freshwater emergent and scrub-shrub wetlands along the banks of Deep Run Reservoir. In both areas there are large swaths of wetland that have been overrun by common reed (Phragmites australis) and lesser amounts of other invasives including of broad-leaved cattail (Typha latifollia) and reed canary-grass (Phalaris arundinacea). These wetland areas have low resource values due to the predominance of invasive plant species.

The goal of the project is to convert these low-quality wetlands into highly functional wetlands that are integrated into the rest of the landscape, within Areas A, B, and the greater preserve, thus creating a functional system of native floodplain forest, scrub-shrub and emergent wetlands that is integrated with existing forested upland buffers. This integrated landscape will provide high quality habitat for common wildlife and threatened and endangered species including Bald Eagles, Red-headed Woodpeckers and Yellow-crowned Night-herons. Wetland enhancement will be accomplished through the careful eradication of Phragmites and other invasive wetland plants which will then be replaced by native emergent wetland plants, scrub-shrub species and native trees. The invasives eradication program began in the fall of 2016 and construction and planting of the remaining portions of the project are scheduled for the spring of 2017.