GreenVest Is Proud to Announce Another Award Win

We are proud that our Bacon Ridge Branch Project was recognized in a category that highlights efforts to “enhance the function, stability, and ecosystem services of an urban stream.” This pride includes not only our results, but also, of course, extends to our fabulous partners in this venture: Biohabitats, Inc. (project engineers), Environmental Quality Resources (project construction), MDOT|SHA (project sponsor), the Elks Camp Barrett, Coastal Resources, Inc., McCormick Taylor, and Hannon Armstrong. This project wouldn’t have been possible, let alone an award-winning success, without all the hard work of our partners, and we want to extend our appreciation to each and every one of them.

GreenVest was developer and team lead on the Bacon Ridge Branch Project, as such, we were responsible for all aspects of design, implementation, and performance. Our innovative approach resulted in restored hydrology and function. Design elements included: addressing existing channel instabilities, raising the water surface elevation, reconnecting the floodplain, reducing erosive storm energies, and stabilizing headwater tributaries—generating long-term, functional sustainability within a dynamic stream/floodplain/wetland system. 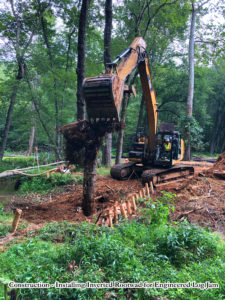 The Bacon Ridge Branch Project met and exceeded our restoration goals. Our unique, nature-based approach incorporated the use of on-site structural wood, root wads, brush, and soil materials. This approach supports the regeneration of forest structure and composition, is self-maintaining, and mimics natural regenerative processes.

GV’s leadership on this project meant that restored streams were fully integrated with their floodplains; drained wetlands had their hydroperiods restored; headwater tributaries were stabilized; water quality was significantly improved; and wildlife habitats were strengthened. Construction was finished four months ahead of schedule and before the yellow perch spawning season. As a result, yellow perch egg masses were observed on woody structures two months after construction was completed. In addition, several Forest Interior Dwelling Species were observed within the site during the first growing season after construction.

Lessons learned on this project are already being applied to the similar projects and will be incorporated in plans for future projects. The Bacon Ridge Branch Project was a resounding success. Recognition by the Chesapeake Stormwater Network for such a job well done truly makes all of GreenVest beam with pride.