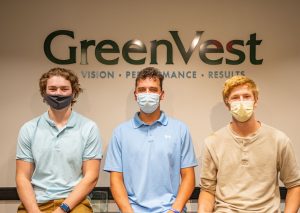 (from left to right) Nate, Christian, and Matt

It’s always a bittersweet time at GreenVest when summer interns return to college. We love having them on our team and appreciate all of their hard work, but we’re proud to see them return to school to continue to learn and grow.

This year, we offer our thanks and good wishes to three valuable interns. Christian and Matt were returning operations interns, and we were happy to welcome them back to GreenVest for another summer. Nate was our legal intern, and did a fantastic job taking on the brand-new position.

Here’s what Christian, Matt, and Nate thought of their internships with GreenVest:

“This past summer was one of my favorite summers at GreenVest, I was able to work both in the office, and the field. This combination of work allowed me to understand what we are doing in the field, and why it matters. After completing some vegetation monitoring in the field with Bill and Bobby it was nice to work on the data entry with Jack as it helped me get a more complete understanding of how everything works. While I can’t pick a specific project that was my favorite, I can tell you that best thing about GreenVest is its employees. Bill and Bobby have been amazing out in the field, from plant IDs to stream repairs, they taught me everything I know. In the office, Jack was the best, he helped me more times than I can count, and was always nice while doing it. And of course, Pat, he made us feel like a real part of the company. Oftentimes you do not see a VP who is asking the interns for their opinion on projects, but Pat really listened to what we had to say about our experience at each job site. While those are the people I have worked closest with, I truly don’t have a bad word to say about anyone that works here, I mean, Sydney helped me reset my password three times today!”

“This is my fourth year working with GreenVest and I can say it has been a rewarding and informative experience. This year specifically has had a larger focus on the identification of native and non-native plants as well as different methods of repairing stream banks. I can also say that I’ve learned more about how environmental systems work and how they fit within a societal context. Not to mention the people that I’ve had the chance to work with have been very knowledgeable. Much of this year was spent spraying herbicide and doing many different tasks that would contribute to the health of the site. Much of the work felt meaningful and like we were contributing to the health of the greater region.”

“This summer I worked with the legal department on creating a database with every piece of land we have under contract. I also assisted in research into potential sites and helped prepare other legal documents. My favorite part of the internship was definitely working with legal documents and assisting in their preparation. I really enjoyed seeing how a company focused on environmental restoration worked and specifically the legal side of that. I plan on becoming a lawyer with an environmental focus and so this was a great internship for me.”