The Importance of Wetlands in Hurricane-Damage Prevention

“[Wetlands] are nature’s flood defenses and we need them now more than ever.”
– Dr. Tom Fairchild, Swansea University

Protecting our wetlands is important—this we know.

From the life they support, to the food they provide, to the cleansing of our water and storage of harmful carbon, healthy wetlands are essential to the wellbeing of our planet and every human living on it.

But new research (by Dr. Tom Fairchild et al.) shows that wetlands are even more important when dealing with intense weather events such as storms, flooding, and the dangerous combination of the two.

As seen recently by the devastation wrought by Hurricane Ida—Louisiana’s second-most damaging hurricane on record, causing at least $50 billion in damages—storms can pack a powerful and long-lasting punch.

It’s good, then, that Mother Nature has provided all-natural defenses to the raging waters of storms.

Let’s examine the importance of wetlands in hurricane damage prevention and what GreenVest does to help bolster these wondrous nature-based defenses. 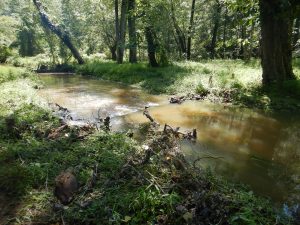 Excess stormwater flows over a log jam on the mainstem of Bacon Ridge Branch in the days following a 4” rain event in August 2020.

Wetlands are the perfect marriage of water and vegetation. The vegetation is what separates them from being classified as open water and is their superpower in storm mitigation.

The vegetation does two things to the influx of water from storms. First, it absorbs some of it—hydrating the plants—which lessens flood surges. Second, the vegetation creates friction in the waterway, which slows stormwater.

The previously mentioned research shows that fully vegetated wetlands can reduce flooding by 34.5% and lower flood water levels by as much as 43.6%. To determine these results, the research team computer modeled multiple case-studies based on real-world collected storm data. They subjected estuaries with varying levels of vegetation to three magnitudes of storm events (annual storms, once-in-a-decade storms, and once-in-a-century storms).

The estuary is just one type of wetland, and is supremely important in the reduction of flooding and flood levels. Estuaries transition from sea water to fresh water and are often among the first places water surges when hurricanes move inland. Small estuaries feed larger estuaries, and both can have significant positive impacts on our communities.

During the simulations of the largest storm events, estuaries reduced floods by 35% and decreased damages by 37%. Across all sizes of storms, wetlands saved an average of $2.7 million in damages per estuary.

Let’s look at a past real-world example: 2012’s Hurricane Sandy. When it hammered the East Coast, wetlands actually reduced damages to approximately 80% of the entire region, preventing a little over 1% of the total damages. Now, 1% might not seem like a lot, but Sandy was such a massive storm that 1% equates to over $625 million in prevented damage.

As seen with Sandy, more wetlands directly translated into greater storm protection. In Maryland and Virginia—where we share the spoils of the largest estuary in the US: the Chesapeake Bay—our local wetlands decreased flood damages by 20–30%. 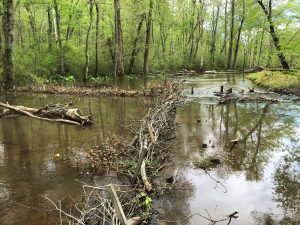 This photo from May 2020 shows the main stem of Bacon Ridge Branch on the right, with the floodplain on the left. The wattles on top of the stream bank and in the floodplain dissipate flow energies during overbank flow events.

As a multidisciplinary leader in ecological restoration, mitigation, and other environmental services, the GreenVest team has spent over 28 years championing natural methods for improving land and water health in the Mid-Atlantic Region. As we tirelessly strive to increase the resiliency and strength of our wetland areas, it is encouraging to find studies supporting the importance of our work.

Every GreenVest ecological restoration project repairs waterways and strengthens damaged ecosystems. This helps the immediate project area, of course, but the benefits of these resilience initiatives ripple throughout the entire community by reinforcing a natural defense against ever-more-common massive storms and devastating hurricanes.

A great example of one of our wetland enhancement successes is our Bacon Ridge Branch Stream Restoration Project in the South River Watershed. By using as much on-site material as possible, we were able to increase the ground water elevations across the floodplain while positively affecting the local flora.

Not only did this restore a habitat for many regional animals, but it also improved the ability of these wetlands to help protect against storms and their associated flooding. Read more about the Bacon Ridge Branch Stream Restoration Project in our White Paper.

Like all well-made systems, nature has created ways to alleviate excess pressure on its parts. As the strain increases due to climate change, other man-made stressors, and random geological and meteorological events, sometimes the pressure can be too much. By restoring our streams and wetlands, GreenVest protects some of our planet’s most important natural defense mechanisms.