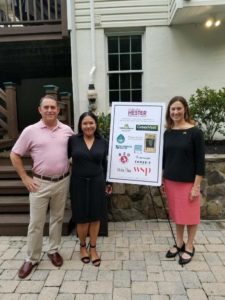 GreenVest recently hosted a fundraiser for State Senator Katie Fry Hester. It was a beautiful day, perfectly complementing the local food and beverages provided by Manor Hill, RED, and the Wine Bin. With the help of our sponsors—Ashton Manor Environmental, Environmental Quality Resources, JemTech Environmental, KCI Technologies, McCormick Taylor, Site Insight, Three E Consulting, and WSP—we were able to both celebrate the Senator’s commitment to the environment, education, agriculture, and transportation, and raise over $11,000.

While championing for these platforms, Senator Hester has secured funding for flood mitigation in Ellicott City, where massive flood events caused major damage in 2016 and 2018. GreenVest is proud to support the Senator in her efforts to increase resiliency in her district and throughout the state.

Thank you to all who attended and helped Senator Hester’s cause. A big thank you to our Senior Vice President, Brett Berkley, and his wife Jem Tacadena, of JemTech Environmental, for hosting this event!