“…Being found in great multitudes all over the country, their noise made the cow-bells inaudible in the woods.” – Rev. Andreas Sandel, 1715.

Though cicadas are mentioned in Homer’s Illiad, the above quote is possibly the first known written description of the Brood X cicada. Brood X was mentioned again 17 years later by botanist John Bartram, and 17 years after that by naturalist Pehr Halm and Maryland’s own Benjamin Banneker, a mathematician, astronomer, surveyor, and naturalist.

Although some species of cicadas emerge every summer, others emerge en-masse on 13-year or on 17-year cycles. They don’t appear all at once throughout their range: different Broods emerge in different locations during different years, but they all follow the same 13- or 17-year cycle. The Broods were named and numbered in 1898 by Charles Marlatt to differentiate the various cicada broods based on when they emerge. He named the 17 17-year cicada broods I to XVII, and the 13 13-year broods XVIII to XXX. Of the 30 Broods Marlett numbered, Brood X, which occurs across a large swath of Maryland, Northern Virginia, West Virginia, and Pennsylvania, is the largest.

In the Mid-Atlantic, vast swarms of previously subterranean insects began to emerge when soil temperatures reached 64°F. Brood X cicadas made their transition from nymph to adults to mate and lay eggs. Billions, possibly trillions, of cicadas are expected to have made an appearance before the new offspring of Brood X return underground.

But how is a region’s ecology impacted by such a massive influx of insect life? Are cicadas harmful or helpful to the environment?  And how does GreenVest deal with working while Brood X is out and about? 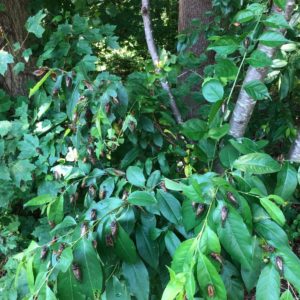 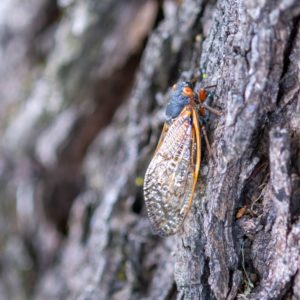 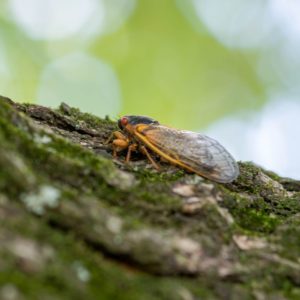 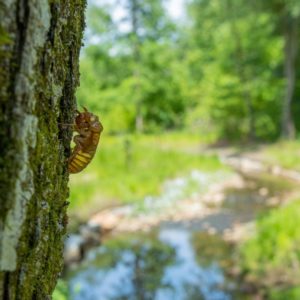 To fully understand the ecological impact of these septdecennial insect marvels, we first must examine their lifecycle. Brood X cicadas emerge after 17 years of life underground. For the almost two decades before they venture into the sun, cicadas burrow through the earth searching out the roots of trees and large plants. They tap into these roots to feed off of the xylem fluid, the nutrient-rich liquid that roots pull from the soil and transport upward to feed the plant.

Once they emerge and molt, cicadas head to the treetops to find a mate using their familiar buzz-like call. Some continue to feed on xylem fluid (this time, from the other end of the tree) until they’ve mated. Then, the females cut slits into small branches, lay their eggs, and all the adults die. A few weeks later, the eggs hatch and the cicada nymphs fall from their lofty nursery, burrowing into the ground to start the whole process all over again.

The feeding and egg laying aspects of cicada life does impact the health of trees, but the size of the tree plays a big part. Sucking away the xylem, of course, can lessen the nutrients plants receive and egg laying results in damage to small tree branches. This may pose a threat to young and smaller trees, which is why some people recommend waiting to plant saplings until the cicada wave is over or using cicada netting to protect recently planted (or smaller) trees. As for large trees, as Mike Raupp, Professor Emeritus of the Entomology Department at the University of Maryland, told PBS NewsHour, “There have been several studies that show no long-lasting effect on mature, well-established trees.”

Perhaps the biggest impact to the environment is the addition of food from every stage of a cicada’s lifecycle. While the nymphs do drink the xylem fluid of plants, they also bring nutrients deep into the ground, feeding the roots in return. As Thomas Moore, Professor Emeritus and Curator Emeritus at the University of Michigan, told WEMU, “The emergence holes allow sunlight, air, water, and nutrients to penetrate more rapidly and to greater depths into the soil than typically.” He also pointed out that some forests experience additional growth the year after a Brood emergence.

Once the cicadas have molted, they become an additional food source for nearby carnivores. Just like the aforementioned forest growth, periodic cicadas also cause bird populations to drastically increase, sometimes for years after a visit. So many emerge at once that predators are able to eat their fill while still leaving a large amount of breeding pairs, a behavior called predator satiation. In fact, this is thought to be one of the main reasons they emerge en-masse—a unique strategy to continue the propagation of the Brood.

Once the adult cicadas die, their corpses become yet another source of food. As they decompose, cicada bodies flood the soil with nitrogen: an element that is essential for plant health but not always as available in the ground. The remains of Brood X enrich the soil itself, providing a beneficial coda to their 17-year odyssey.

The biggest ecological threat in relation to cicadas are humans. In that same PBS NewsHour special, Jessica Ware, an Entomologist for the American Museum of Natural History, noted, “As we shape the landscape, that kind of also shapes where we find broods now. There are some broods that have gone extinct.” This a reminder how our choices impact the habitats of all those creatures who live around us. This effect can be seen locally where older neighborhoods with long-established parks and canopy trees have Brood X cicadas in abundance while newer developments that have been extensively graded and the trees removed will have none.

Unaware of their mostly beneficial nature or annoyed at their 105dB calling—as loud as a lawnmower or jet flyover—some humans turn to pesticides in an attempt to lessen the numbers. Both Jessica Ware and Mike Raupp warn against their use: some studies have shown them ineffectual, leaving the chemicals only harmful to surrounding insect, plant, and animal life.

Here at GreenVest, when we work on a restoration or conservation project, we use as many light construction techniques as possible to reduce the impact to surrounding wildlife, above and below ground. We strive to maximize ecologically responsible solutions, avoiding things like compacting the soil, unnecessary earth work, or cutting down mature trees. It’s a delicate dance of working with nature to restore nature. At one of our recently constructed stream restoration projects, the call of the cicadas can be heard loud and clear: a great indication that we were able to minimize impacts to these long-lived and delicate insects.

Similarly, on our Mattawoman mitigation bank, we explicitly minimized any impact to the riparian buffer and reduced negative effects to the mature trees and other natural assets. This was not as an afterthought, but a facet of careful and strategic planning throughout the design and construction process.

Though it is not always possible, every GreenVest conservation and restoration project strives to use a delicate touch and to leave the environment better than when we started. We want to make sure the next time our 17-year visitors emerge, they’ll be greeted with a healthier and more harmonious natural world.